"Touches of sly humor add appeal to Booth's standout debut . . . Betrayals within the sheriff's department and issues left unresolved hint at much more to come in what promises to be a most engaging regional police series."

"Former crime reporter Booth imbues her fast-moving narrative, which celebrates its Ozarks setting, with humor and humanity. A promising debut."

"Former crime reporter Booth's debut introduces an engaging cop with wonderful family appeal."
- Library Journal
"Claire Booth hits the ground running in this debut novel set in the Missouri Ozarks. She writes with the assurance and clarity of a more seasoned pro."

"This contemporary take on a locked-room puzzle is chilling, compelling and completely entertaining, and Claire Booth is a wonderful new voice in crime fiction."

The Branson Beauty, an old showboat, has crashed in the waters of an Ozark mountain lake just outside the popular tourist destination of Branson, Missouri. More than one hundred people are trapped aboard. Hank Worth is still settling into his new role as county sheriff, and when he responds to the emergency call, he knows he's in for a long winter's day of helping elderly people into rafts and bringing them ashore. He anticipates a lot of anxiety, many arguments, and extra costs for emergency equipment that will stretch the county's already thin budget to the breaking point. But those are the least of his worries after he discovers high school track star Mandy Bryson's body locked inside the Captain's private dining room.

In her captivating debut novel, Claire Booth has created a broad cast of wonderfully compelling characters, and writes with a style that perfectly blends humor with the emotional drama and heartache of a murder investigation. 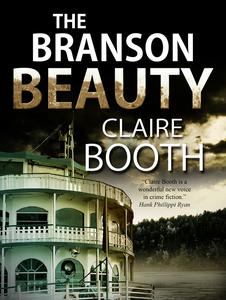